Between 2007 and 2017, for The Oxford Times, I was privileged to cast away exceptional people from Town, Gown and County on my mythical island of Oxtopia. An early castaway was Bill Heine, known as a Radio Oxford presenter and as the owner of a certain house in New High St, Headington. For his inspirational object to take with him to Oxtopia, Bill chose a sculpture called Embrace.

It was intended for the Berlin Wall, but when that came down, the idea was abandoned, so I suggested a wall much closer – in Belfast!

The photoshoot with Embrace was my first encounter with John Buckley, the artist who made it and who also designed and constructed the Shark. The name of the Headington Shark seems to be forever linked to Bill himself – rather than to the artist who created it.  I soon realised that not only is John an exceptional artist but is a much under-celebrated one. The reason could partly be due to his modesty.

There is a link to John’s story in this blog  www.sylviavetta.co.uk/2022/02/15/expect-the-unexpected-at-the-second-oxford-independent-book-fair/

When that feature was almost ready to go to print, I rang John and suggested he send me a jpg of the poster of his landmines related exhibition.

It was the result of his work as a war artist in Cambodia for MAG who campaigned to ban and clear land mines. 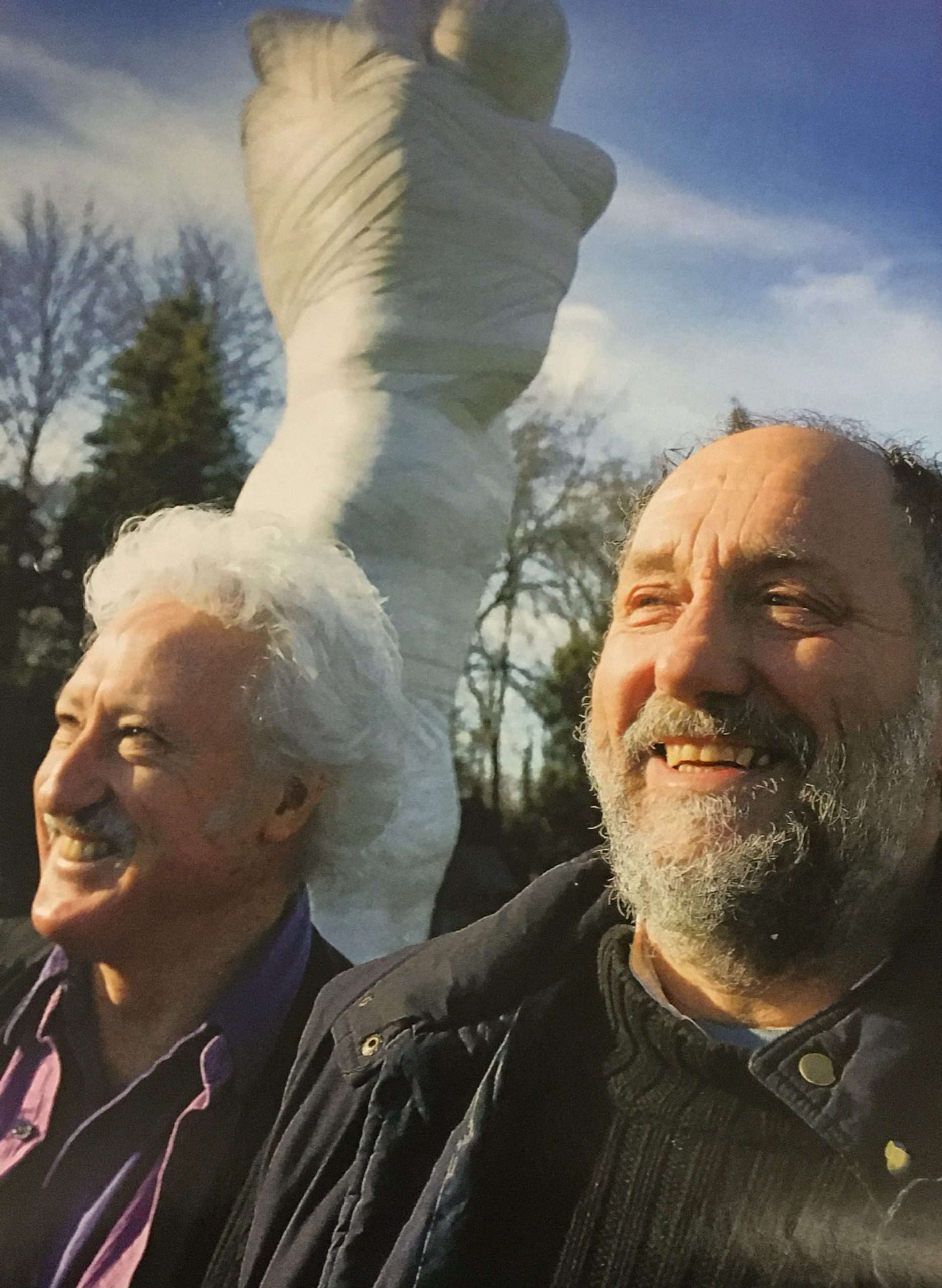 His work before and since has been on the cutting-edge raising awareness of human rights abuses not often talked about.  If you take a ramble near Checkenden, you will come across a tear-jerking and shocking sculpture that he made.  The then editor of Oxfordshire Limited Edition, Tim Metcalfe, used Nuba Survival as the cover in August 2012 when my castaway feature on John was published.  It can certainly be uncomfortable being reminded of man’s inhumanity to man – maybe that is why John’s sculpture is on a farm and not in the Tate Modern?

The shark even came about because of the bombing of Tripoli by planes that took off from Upper Heyford. Oxford City Council spent six  years trying to get Bill and John to take the shark down. During the long enquiry John made sketches inside the Town Hall. He rang me to say he has found them! He has volunteered to bring his pictures to the Oxford Indie Book Fair on April 2 to the Wesley Memorial Hall so they can be on public display for the first time. 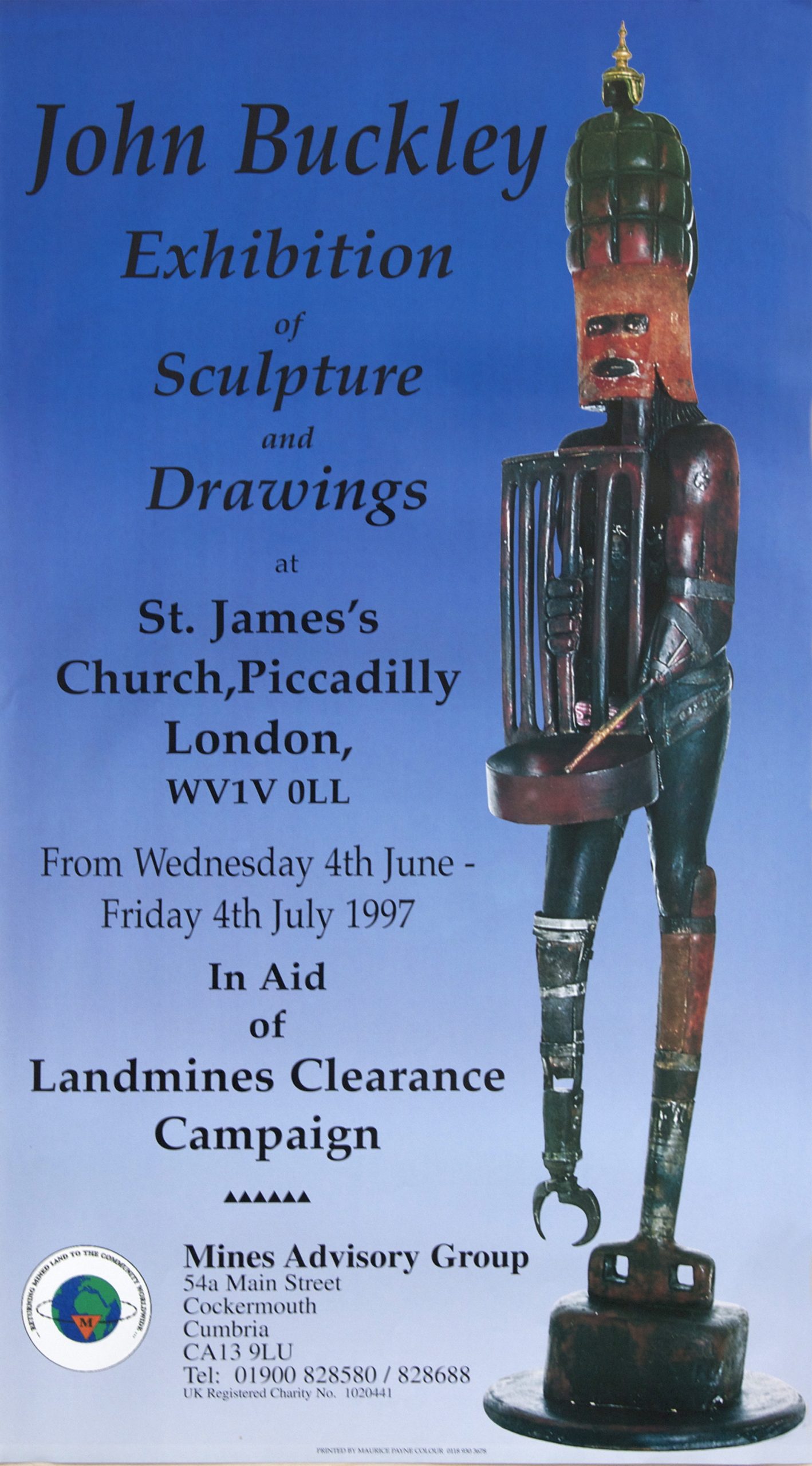 Come and see them and meet the artist?

John’s stand will be between mine and Oxfordfolio who published The Hunting of the Shark: The Story Behind the Tale That Crash Landed on an Unsuspecting Oxford Suburban Street Paperback – John’s castaway feature is in Oxford Castaways 2. Maybe we can persuade him to sign copies? 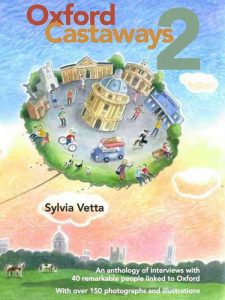 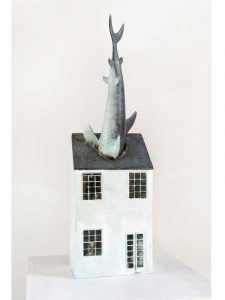 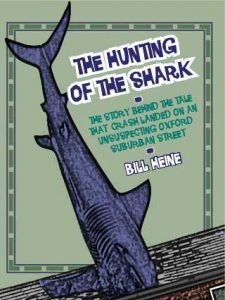 He will also bring the bronze replica that he has made of the shark house.